A Look Into the Womb 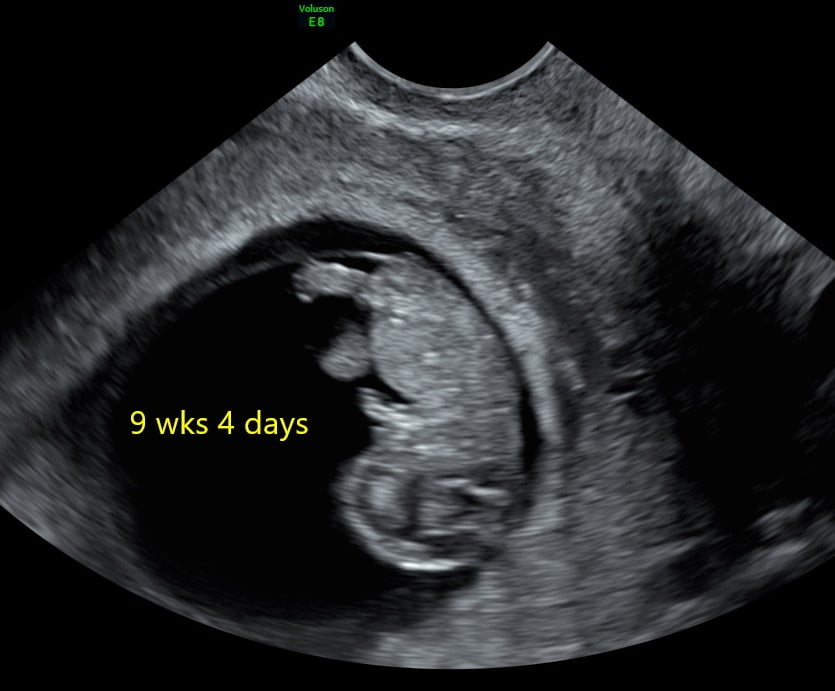 What does your womb look like during pregnancy? what is going on with baby in the first trimester?

This is an ultrasound picture of a fetus who is 9 weeks and 4 days gestation. During this ultrasound, the pregnant mother observed the baby’s head and developing brain, the baby’s heart beating about 180 beats per minute, and movement of the baby’s hand to it’s mouth. She was also able to see the baby’s foot with it’s tiny little toes, as seen in this picture. This fetus measured 2.7cm from the top of it’s head to it’s rump, the size of a large grape. In this picture, we can see the baby’s hand by it’s mouth, the tiny nose, part of the umbilical cord, and the foot and toes.

At this stage of development, the baby has begun to move around, including moving arms and legs. The eyes are fully formed, and she or he has tiny earlobes! All the basic physiology is in place at this stage, including the brain, intestines, neural pathways, breathing tubes, and the heart which has been beating for over a month! From this point forward, the fetus will gain weight quickly as the body systems are strengthened and fine-tuned.

The abortion pill RU486 has been approved for use in pregnancies up to 70 days after a woman’s last menstrual period. That is up to 10 weeks gestation. Many women who choose to take the abortion pill believe the lie that their baby is not formed yet. They believe that it is just a clump of cells and it’s not alive. But that’s not the truth. You can see the truth in this picture. This is a fully formed tiny human who moves and whose heart is beating. Ultrasound gives us a window into the womb, so now we know the truth.

For more information about your options and getting an ultrasound before abortion, visit us at 1801 18th St or call for an appointment.